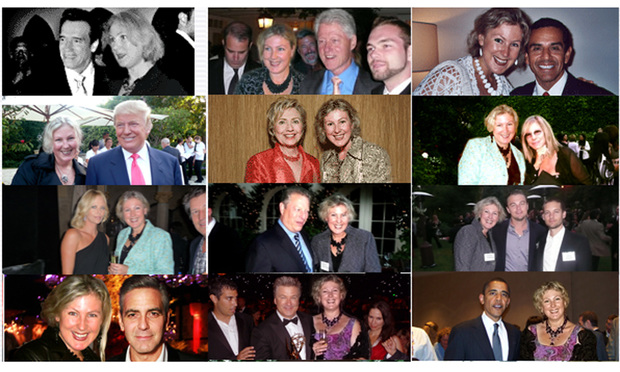 Call her the Zelig or Forrest Gump of California attorneys, but you can also call her “suspended.”

I’ve seen a lot of fun and strange law firm web site ethics issues come up since the mid-90s, but it is refreshing to see that there are still new takes on the concept of “deceptive and misleading” lawyer advertising online in 2014.

A State Bar Court judge in Sacramento, California has recommended a six month suspension for a Los Angeles attorney who put Photoshop to use in manipulating a photo gallery on her website filled with fake pictures of her with various politicians, celebrities and star athletes. The court found that this photo gallery amounted to deceptive advertising. Read the highly entertaining opinion here.

Svetlana Sangary’s website describes her litigation boutique in similar ways to most related practices. However, when contacted by the state bar investigating the photos (and another complaint), there was a failure to respond for many months.

Perhaps, she was at the Emmys or lunching with Jamie Foxx–both sounding far more fun than answering to this stuff in court–but was more likely photoshopping another shot out of US Weekly. Among the interesting tidbits in the handling of this matter are:

There are politicians from both parties–Obama, Biden, Gore, two Clintons and a Schwarzenegger to name a few. Hollywood elite from Streisand to Clooney; DiCaprio to Baldwin. People that annoy me like Dr. Phil and Larry King. People I’d like to hang with like Jennifer Garner and Magic Johnson (and Paris Hilton, although I would not usually admit to that one).

Perhaps more entertaining are some of the Yelp reviews I read in looking to learn more about this attorney. Her 6.1 on Avvo will likely take a hit, since that included a 5/5 for professional conduct. My guess is that someone is vetting each accolade, testimonial and result posted for her in various places online.

It was probably close to a decade ago that an attorney came up to me after one of my internet marketing ethics programs for the Pennsylvania Bar Institute in Philadelphia. He was somewhat irate (and annoyed) by a Philadelphia lawyer that displayed a “photo gallery” on his website of him with various politicians and celebrities. He believed that the use of such photos were deceptive and misleading–suggesting to potential clients that he had relationships with these folks and potentially might be suggesting they are clients.

Now this CLE audience member actually expected me to “do something about it.” I still remember responding that I was not the ethics police and that he was free to report this website to the state bar. I don’t know if he ever did. But I did start using that website as an example in my seminars of a “potential issue.” Just minutes ago, I went back online to see if that photo gallery was still a part of the law firm website in 2014–and sure enough, it was. In a twist of irony, many of the politicians and celebs in those photos are the exact same people photoshopped in Ms. Sangary’s gallery–although I do believe his to be authentic.

You might ask me why I don’t “name names” in this example (as I often do). Well, I’m still not the ethics police. And while I don’t know the guy personally, he seems like a good person and is involved in some related organizations outside of the legal profession that I’m also in. So, I’d rather just be nice about it (this time). However, I’ve always suggested in my CLEs that a proper disclaimer in regard to the photo gallery and his relationships might go a long way to appeasing anyone believing the use to be deceptive and misleading advertising. And I might suggest that these two photo gallery examples–from Philadelphia and Los Angeles–will likely make it into my 2015 ethics CLE.

The marketer side of me finds both examples to be entertaining. Although I doubt she can fall back on the “no such thing as bad publicity” argument in this situation. The ethics attorney side of me wonders if the deceptive and misleading argument would still be an issue if indeed those photos were real. Perhaps that is a case of first impression somewhere else for another day.

For Ms. Sangary, the bar court judge also recommended a three year probationary period to go with the six month suspension, and a retaking of a professional responsibility exam. Only in Hollywood.