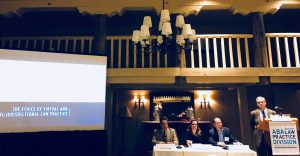 Recently, I had the privilege of serving on a panel at the American Bar Association’s Law Practice Division continuing legal education program on the ethics of virtual and multi-jurisdictional lawyering in Santa Fe, New Mexico. The program was co-sponsored by the State Bar of New Mexico, and took place on May 18, 2018 at the Inn and Spa at Loretto.

Moderated by Albuquerque-based practitioner Charles Gurd, panelists included fellow Philadelphia area attorney Dan Siegel, and Charity Anastasio, Associate Practice Management Advisor at the American Immigration Lawyers Association. It struck me that the audience interest, interaction and participation were greater than in the vast majority of CLEs that I teach. These two intertwining and overlapping issues—virtual law practices and multi-state jurisdictional issues—go hand in hand, and often create as many questions as answers.

When I’m driving down I-95 and leave New Jersey to cross into Delaware, I know it. When I then cross from Delaware into Maryland, I know it as well. I also know that if I’m caught speeding in Delaware, the only police I need to worry about are the ones with Delaware on the side panels. Of course, reciprocity when it comes to fines and points are sometimes blurry, but not nearly as confusing as crossing state lines in your law practice, typically on the Internet. However, as many of the CLE audience opined, most lawyers today have practices that are not confined to one or two states.

While some think of a virtual law practice as a sole practitioner in his or her pajamas working out of a home office or basement, the reality is that there are huge corporate law VLPs that are basically the equivalent of an AMLAW 200 firm without the bricks and mortar, but with the same attorneys (their former partners) and same clients (portable book of business)—minus some of the office hassles and politics that come with the territory. But whether you are a family law solo or M&A lawyer, you may very well be set up now as a VLP. And the question then is exactly what state are you “Under His Eye” (sorry, my wife and I have been watching ‘The Handmaid’s Tale’ on Hulu…I had to use it)? Figuring out which state bars are “in charge” and have oversight is often half the battle.

MSJ issues have increased substantially over the last decade or two as the practice of law has shifted more and more from being location-based. For me, working with law firms on business development strategies, the emphasis has often changed from where the firm or matter is based to where the work or the client might be. I’m typically concerned with the Rules of Professional Conduct as they relate to advertising, marketing and solicitation in a multitude of jurisdictions that may or may not have authority over the lawyer or law firm. But the myriad of issues are very real, and as our program audience can attest, wading through the muddy waters of VLPs and MJPs can seem treacherous. Be sure to know of the ethics rules and opinions, especially in those states where your practice is heavily active.