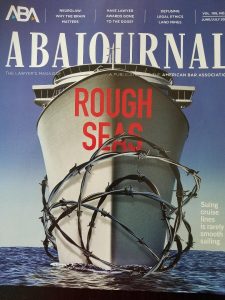 In the June/July 2020 issue of the ABA Journal, Cynthia Sharp asks me about how attorneys can best respond to negative online reviews in “Trashed by Clients Online? Ethically responding to negative reviews,” a subject that I’ve discussed with many attorneys and clients over the years.

It is probably the topic that brings me the most questions during my marketing ethics-related CLE programs. In a recent webinar for the American Legal Institute (ALI), Ethically Navigating the Three Rs: Lawyer Ratings, Rankings, and Reviews, I focus solely on this area as it relates to attorney advertising. And I’ve written about the subject matter multiple times in my ABA Law Practice magazine column as well. Mostly, because unlike many areas of attorney marketing ethics, this one is quite “real” to many lawyers that have been bitten by disgruntled former clients, or unhappy ex-employees, shady competitors or just someone that plain doesn’t like you. The combustible mix of not being able to opt-out of the review process and the sheer fact that this stuff can be highly visible in your online portfolio can be deadly. And many attorneys have responded poorly—and violated ethics rules in the process.

The power of the online review—on Google, Yelp, Facebook, or numerous sites that are legal-specific—has grown exponentially in recent years. Early on, the issues often stemmed from reviews on legal site Avvo (which rewarded attorneys for having reviews in their profiles), and Yelp—the initial home of choice for the disgruntled…there is nothing like being ripped by a Yelper. Facebook could be especially critical to the consumer-facing law practice. But it was really the elevation of reviews on Google that increased the potential for reward and damage. If you think about the evolution of Google in the online marketplace—from sponsored results to adwords; SEO spends on organic results, local/mapped searching and various efforts at developing a social media component (mostly without success), the incorporation of Google Reviews and the related visibility in a search result puts a spotlight on them for the end-user and adds another concern for reputation management of your online portfolio.

END_OF_DOCUMENT_TOKEN_TO_BE_REPLACED

For my April 2014 contribution to Web Marketing Today, I return to a topic that I last covered just 11 months ago in May 2013. So much has changed in the social media space in a relatively short time. The players are still the players. But with Facebook changing–more focus on mobile and more focus on revenue (advertising options)–you simply can’t sit around and stay status quo.

On the marketing side, it has certainly gotten my attention. Many law firms are finding that Facebook provides brand awareness options that are sharper, cheaper and more focused than many traditional advertising methods. And you do not need to be targeting a mass consumer audience to find ways to use some of these tools effectively. The bottom line is this–there are two ultra-powerful websites in the world–Google and Facebook–and if you don’t exist on both, your online universe is not operating at full strength.

END_OF_DOCUMENT_TOKEN_TO_BE_REPLACED

This was my submission for the 2011 ABA Journal Ross Essay Contest. The theme revolved around what “big law” can do to positively impact the practice of law.

On a daily basis, there are success stories in regard to client representation by solo practitioners, boutique and midsize law firms. At the same time, perusal of the Wall Street Journal or New York Times serve as reminders that most “bet the farm” situations still fall in the laps of the nation’s largest law firms.

As an attorney, I have had the opportunity to work with and interact with the “large law firm” from numerous vantage points. I’ve been the “client” as an in-house attorney. I’ve had the opportunity to watch colleagues as an adviser to friends and family. In recent years, I have worked with large law firms on business models and strategies. All of those experiences color my belief that they are uniquely positioned to have the greatest positively changing the practice of law.