For some attorneys—even 40+ years after Bates v. Arizona—marketing itself is a disruption. But when AVVO, the online legal referral and attorney rating service, came along in 2006, it created some of the more significant disruptions to the legal marketing industry. With the company being acquired by Internet Brands last week, the question is whether the business will remain cutting edge?

Of course, as is usually the case, the company touts that things will remain the same and be “business as usual” under new ownership. But that is rarely the case. I would argue that Martindale, Nolo and Total Attorneys—all businesses acquired by Internet Brands (makers of such sites as WebMD, Fodor’s Travel and MySummerCamps) no longer have the same impact they did before being acquired. When Findlaw was acquired by Thomson in 2001, it basically ceased being Findlaw (after the typical “business as usual” period of time). If you want to see the original premise of Findlaw today, you go to Justia. Martindale-Hubbell, founded in 1868 by attorney James Martindale (talk about being ahead of the curve on marketing! I always thought Greg Siskind was first with everything), was what most law firms considered the one piece of business development they would pay for. And pay for they did for over 100 years until the Internet killed the golden goose. When I first started visiting law firms to discuss marketing in 1996, I was often sent to see the librarian—because she updated the Martindale listings—that (plus perhaps the holiday card) was the extent of “marketing.”

END_OF_DOCUMENT_TOKEN_TO_BE_REPLACED 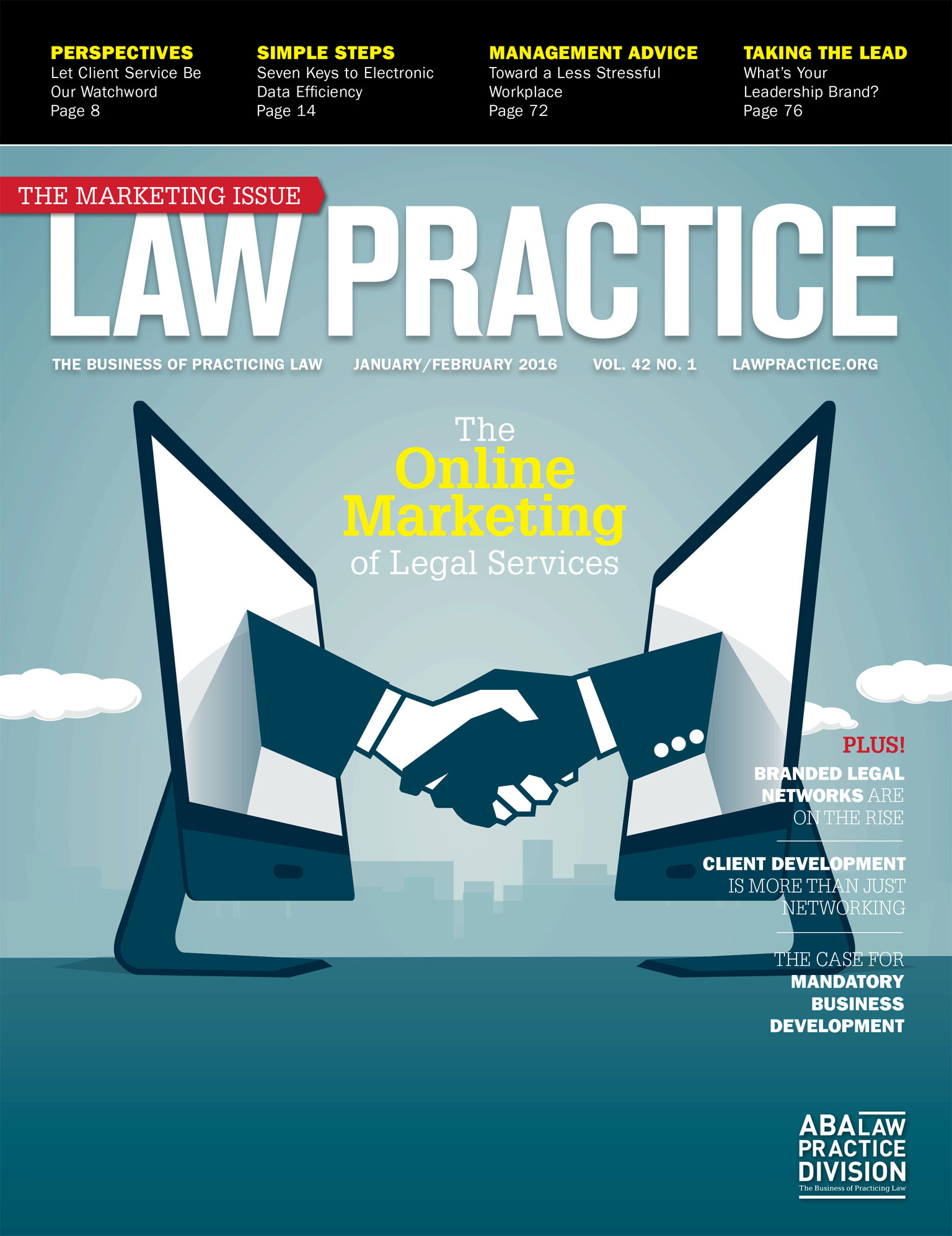 In the January/February 2016 issue of the ABA’s Law Practice Magazine, I was asked to put on my ethics attorney hat in authoring Struggling with Ethics Issues Surrounding Branded Networks. Issue Editor Nick Gaffney asked me to write this sidebar in a magazine dedicated to the theme of branded legal networks–a huge topic of discussion in law practice management.

There is not a more controversial area of lawyer marketing when it comes to interpretation and enforcement of the Rules of Professional Conduct (RPC) than the issues that arise from the ever-growing legion of branded networks in the legal profession. From Avvo and Justia to Best Lawyers and a slew of entities that may or may not be “lead generation,” the issues, rules and opinions vary from state to state. They remain…consistently inconsistent. One thing is for sure, these companies are not going anywhere. The question is where they end up fitting in the long term approach to business development among attorneys. 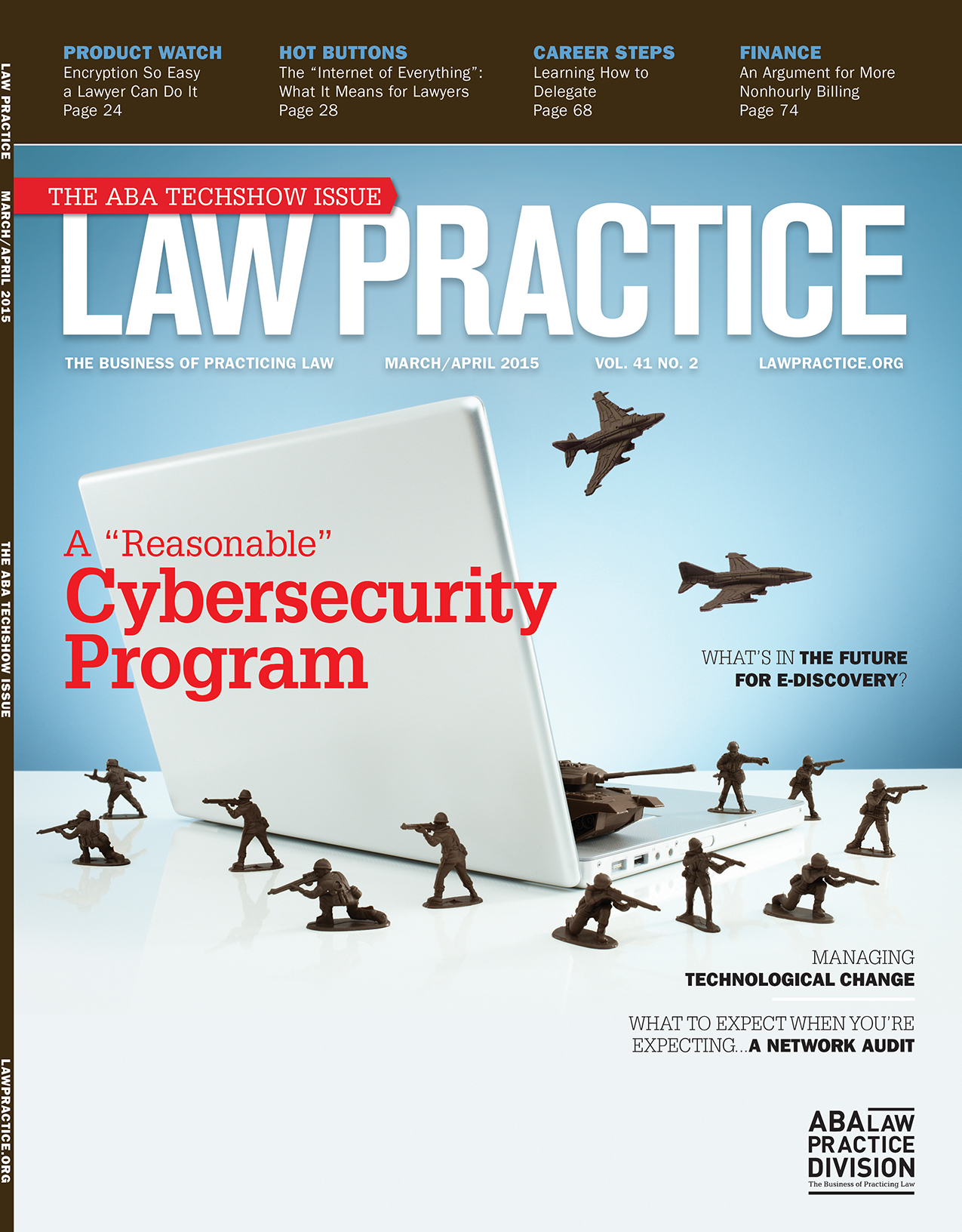 In the March/April 2015 issue of the ABA’s Law Practice magazine, my topic is relevant to pretty much every practicing attorney (not to mention almost every human being on the planet). What does your online portfolio look like, and why should you care?

Every week, I will meet, speak with or e-mail a prospective client. While I will send them my own crafted biography, links to my website and blog, and additional information–what they will often be more interested in is what they find when doing a search for my name. With a somewhat unique first and last name, what they see will almost always be me. This is not the case with many that have more mainstream names to search for.

While some individuals and firms are forced to use reputation management companies to “fix” a page of results, most of us simply live with what we see. But the thought that you have no control over what appears is not accurate. Taking advantage of profile pages on powerful sites should help control that first page of results. Few will venture on to page two. Almost nobody will get to page three. And only stalkers are likely going beyond.

END_OF_DOCUMENT_TOKEN_TO_BE_REPLACED

In the March/April 2014 issue of the ABA’s Law Practice magazine, I address a law firm marketing topic that never seems to lose steam–the impact of lawyer ratings, rankings and reviews on the legal profession.

Of course, I should not really complain. The topic has proven to be great fodder for my Pennsylvania Bar Institute ethics courses; I’ve been quoted countless times in the media on the subject; in the ABA Law Practice Division, we led the “educational” charge with major panels (and participation from all the players in the business) for both the ABA Law Firm Marketing Strategies Conference and an ABA Annual Meeting. Last October, an ABA CLE Premier Speaker Series program on the subject attracted nearly 5,000 attorneys. Everyone always is interested and has an opinion.

It has been fascinating to watch the evolution of the industry over the last 15-odd years. To think, when I first became a lawyer, the only thing you really knew about was Martindale-Hubbell. Today, the brand struggles mightily with shifts from across the pond (the UK’s Chambers publication); from known ranking brands such as U.S. News & World Reports; from thousands of local-yokel attorney “awards”; and both legal and non-legal online reviews from the likes of Avvo and Yelp. The business has never stopped booming, but it has definitely changed–a lot.

END_OF_DOCUMENT_TOKEN_TO_BE_REPLACED

After taking a one month “sabbatical” from my monthly Web Marketing Today article, I address a topic that is becoming increasingly important for the legal professional–how to respond to online criticism.

How Lawyers Should Respond to Online Criticism addresses dos and don’ts as they relate to the growing slate of websites that allow for posting of “reviews”, whether you are a plumber, doctor or lawyer. As I often teach, this is not an area where you have the option to participate. If I’m a client and want to post a positive or negative review of your professional product for the world to see–I can.

I’ve often used the power of Internet-based reviews myself. When my realtor pissed me off a few years back, I let a number of websites know what I thought of her. It did not go unnoticed. I’m a huge review contributor to Open Table–posting at least one a week after every dining experience. I often hear back from restaurants for the good and the bad.